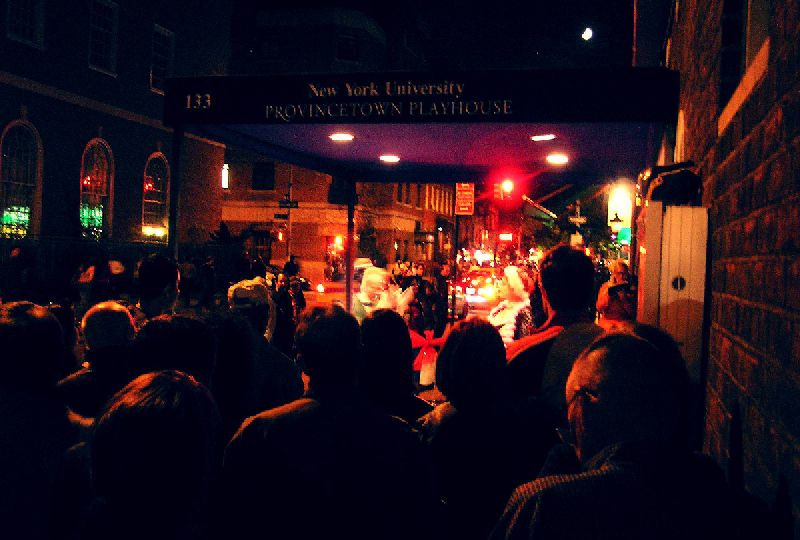 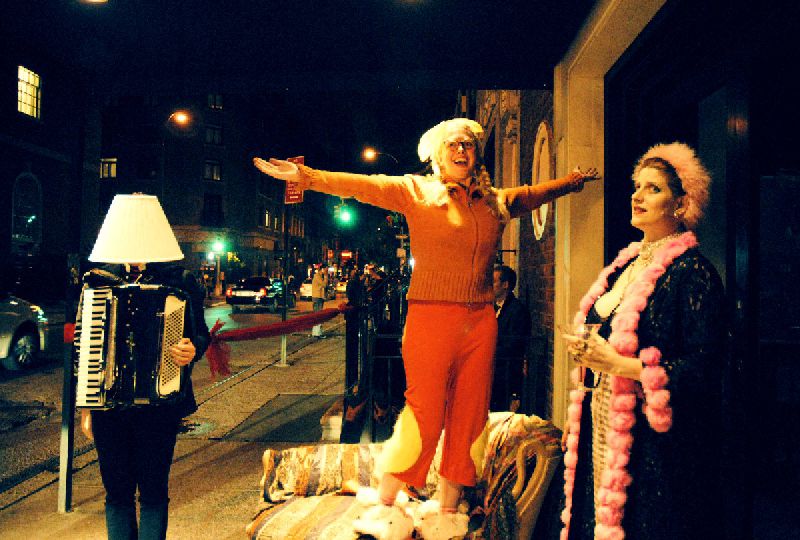 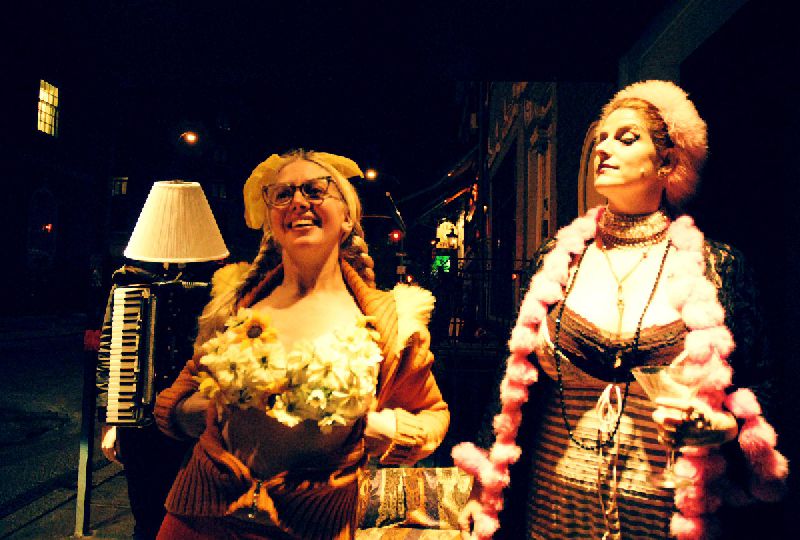 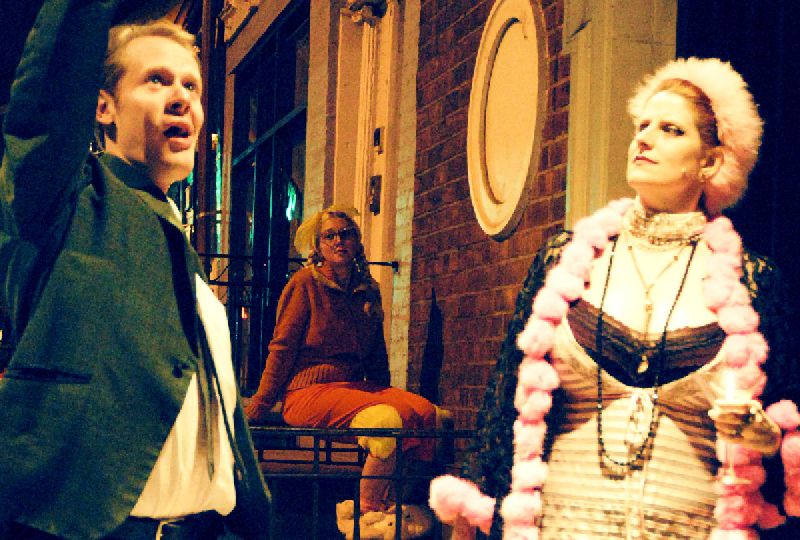 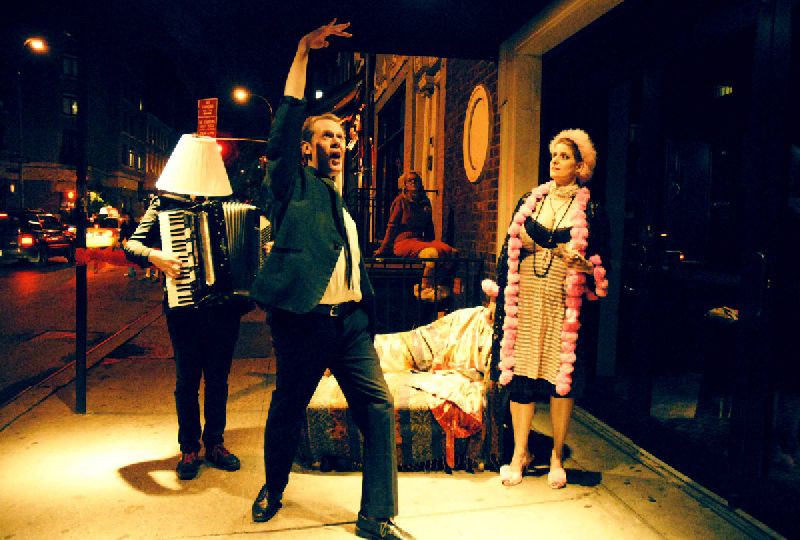 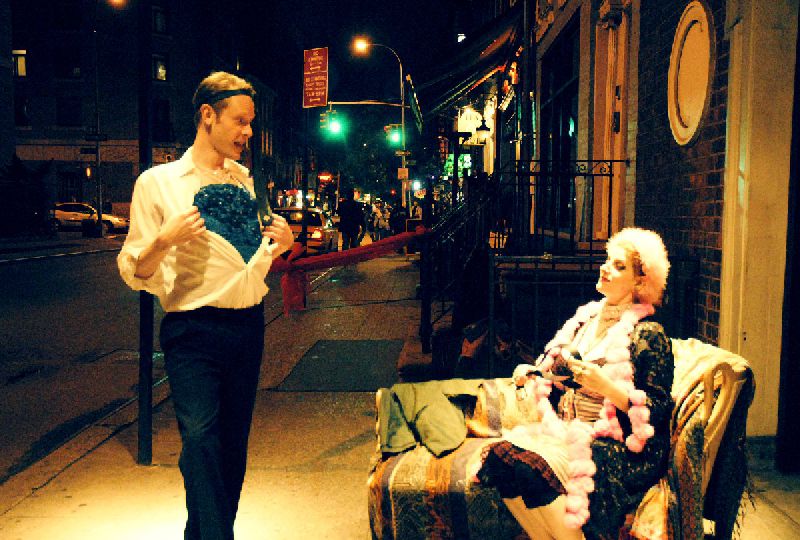 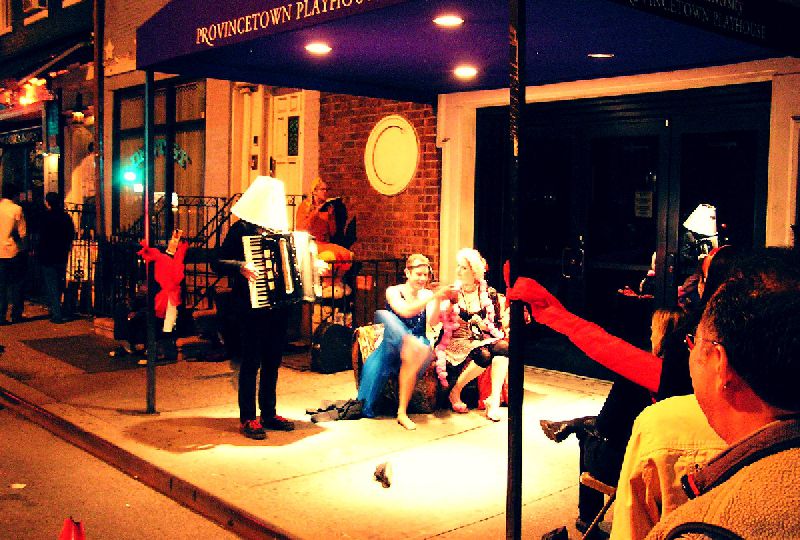 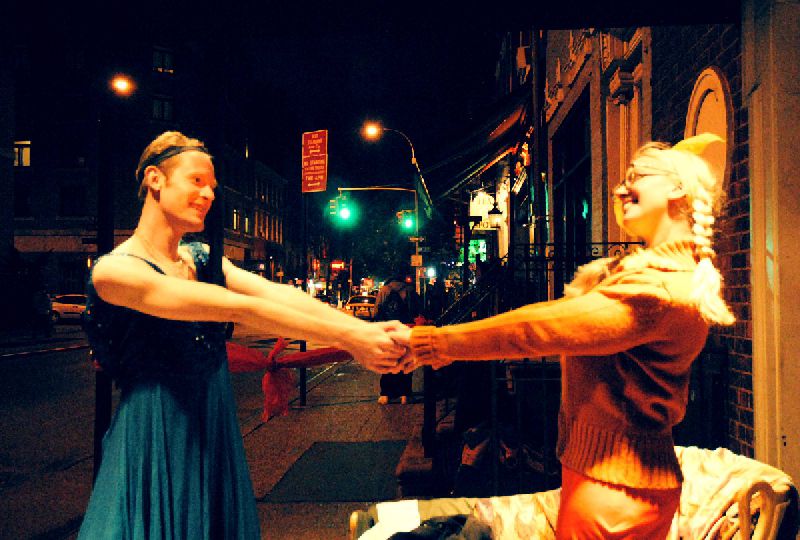 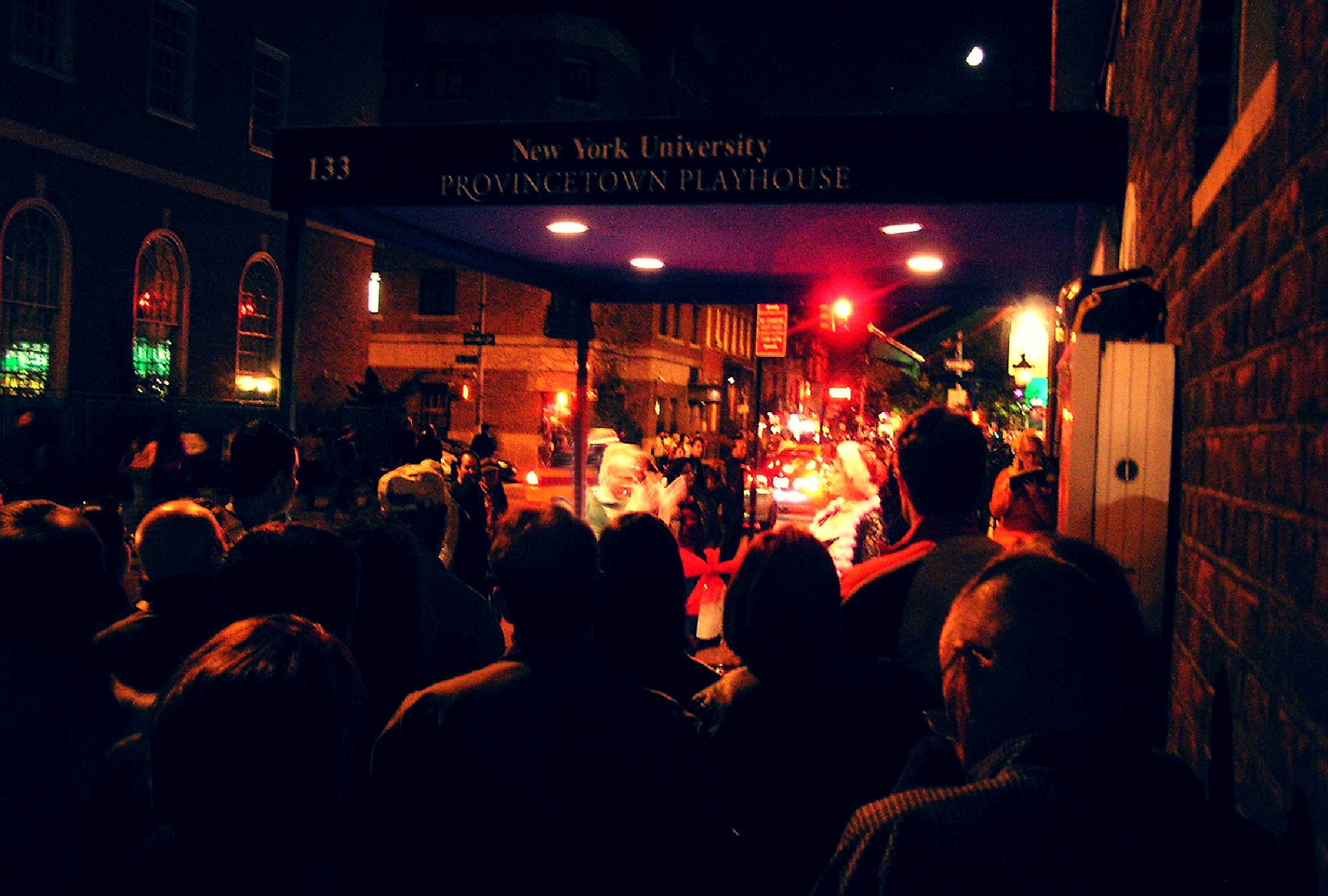 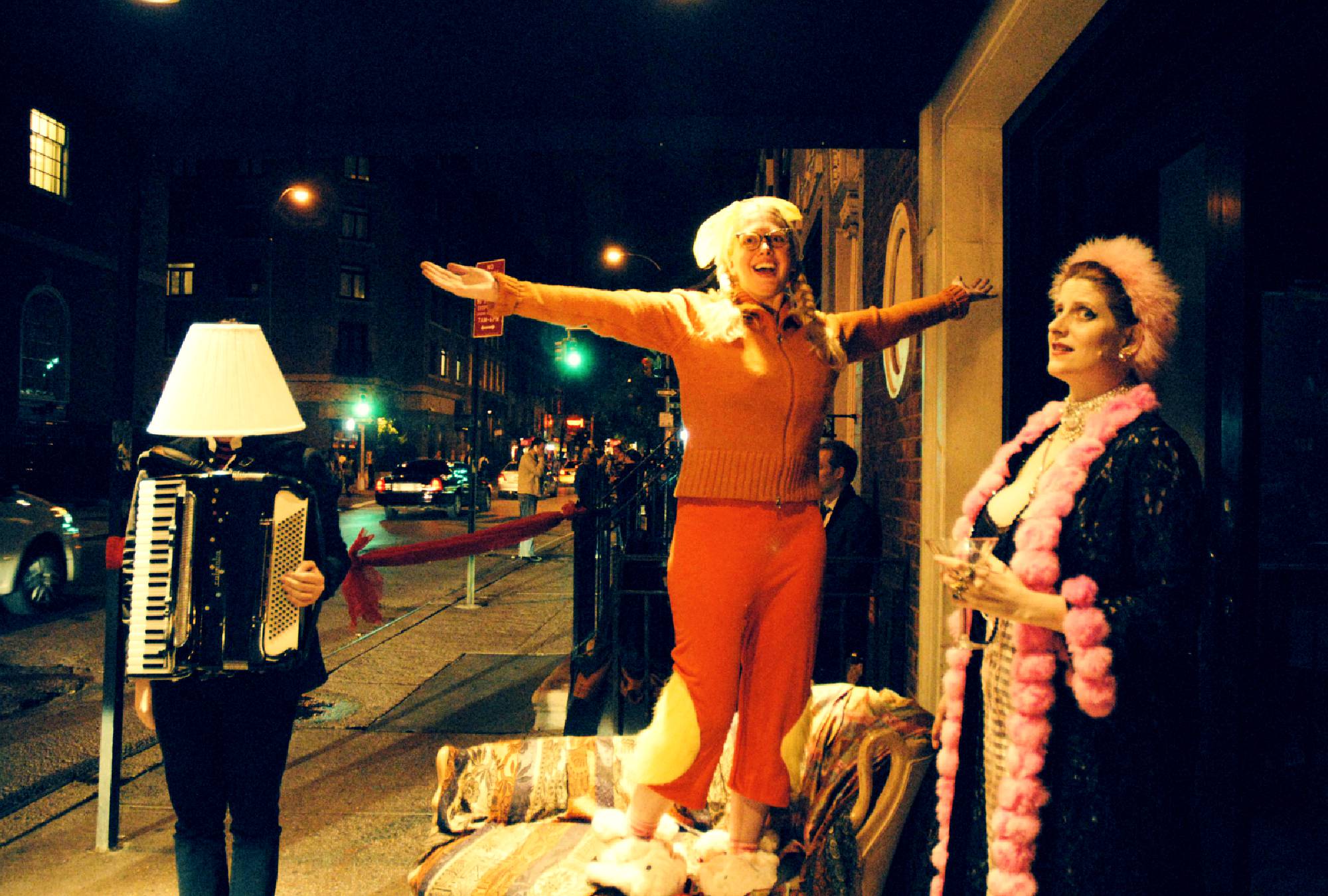 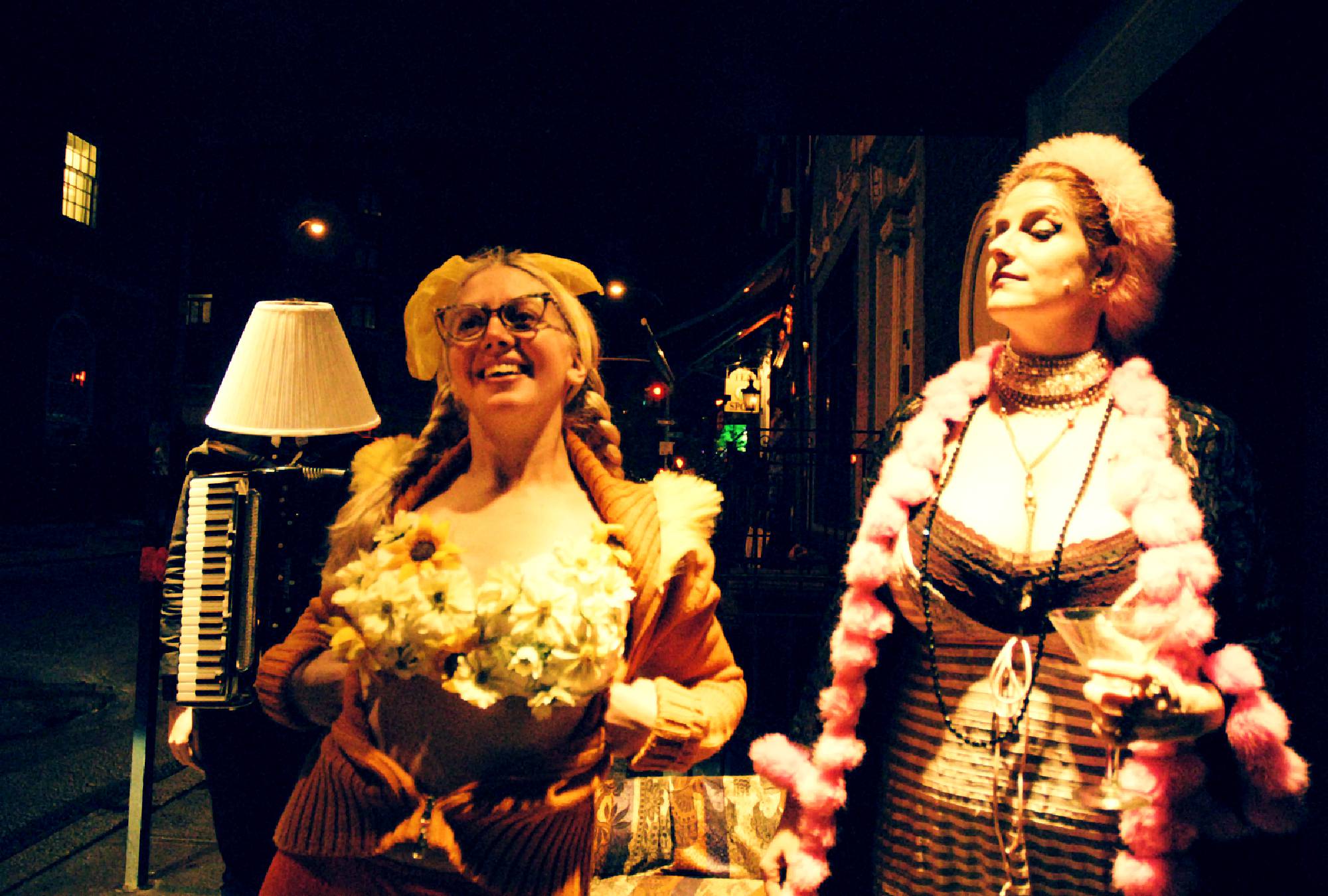 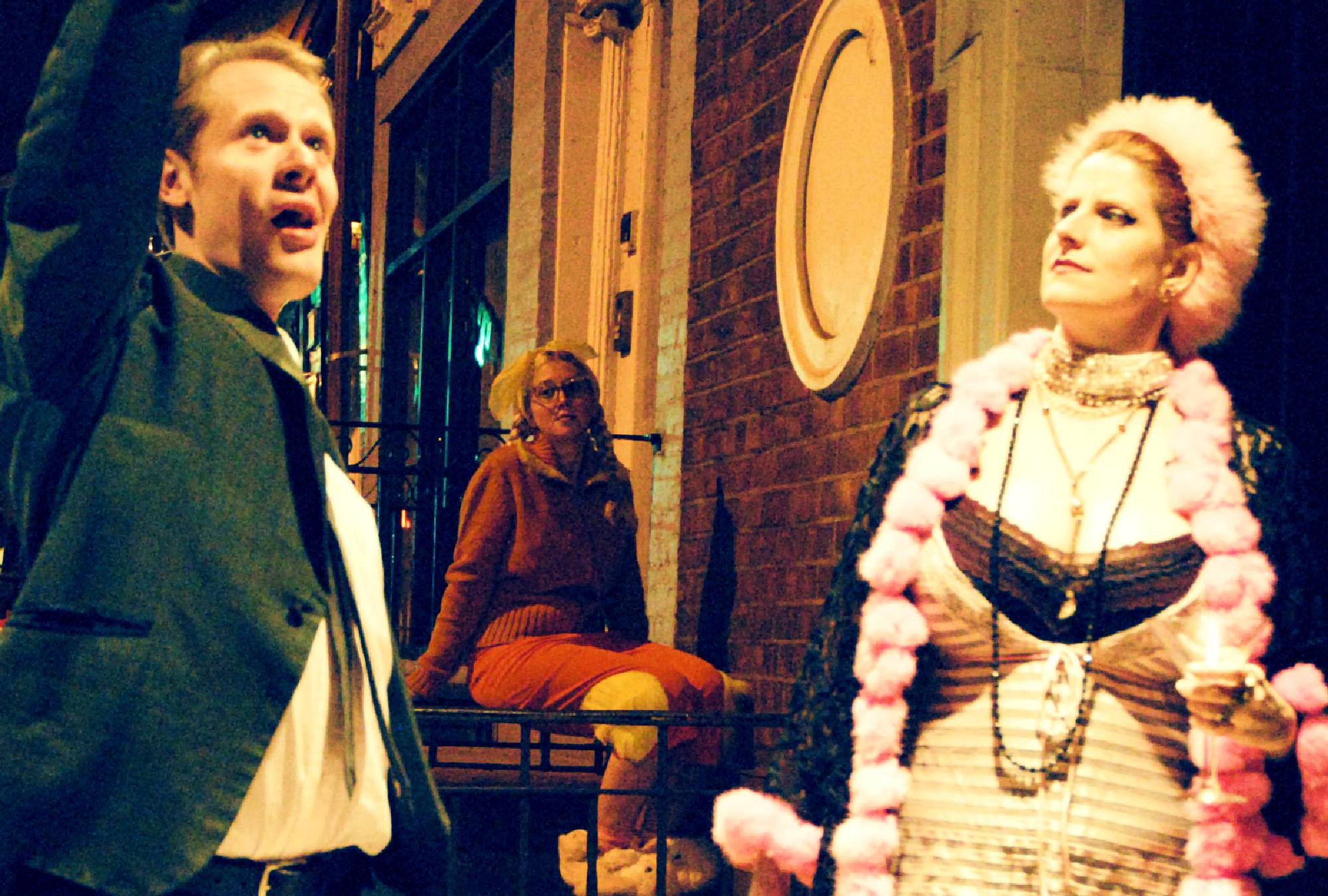 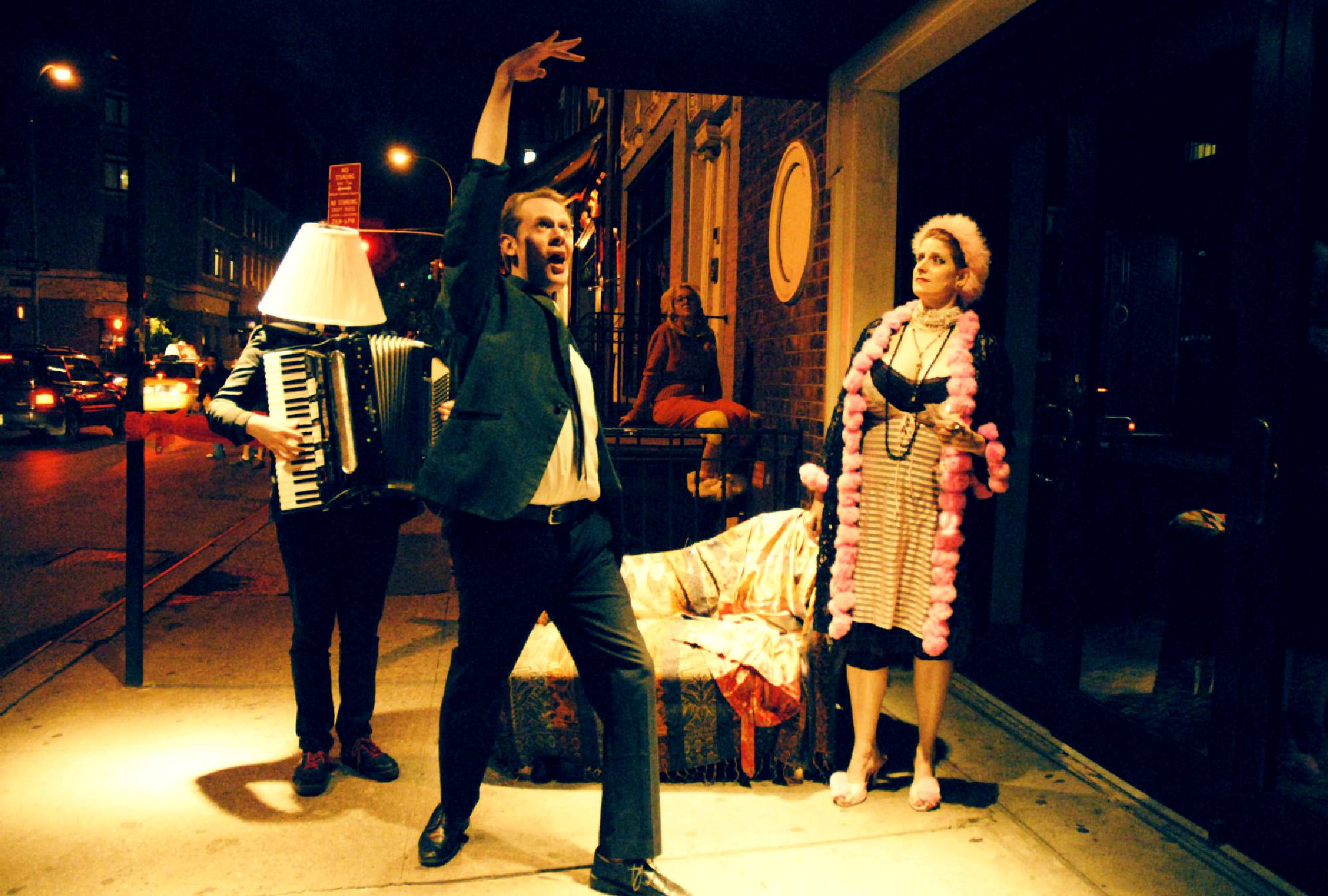 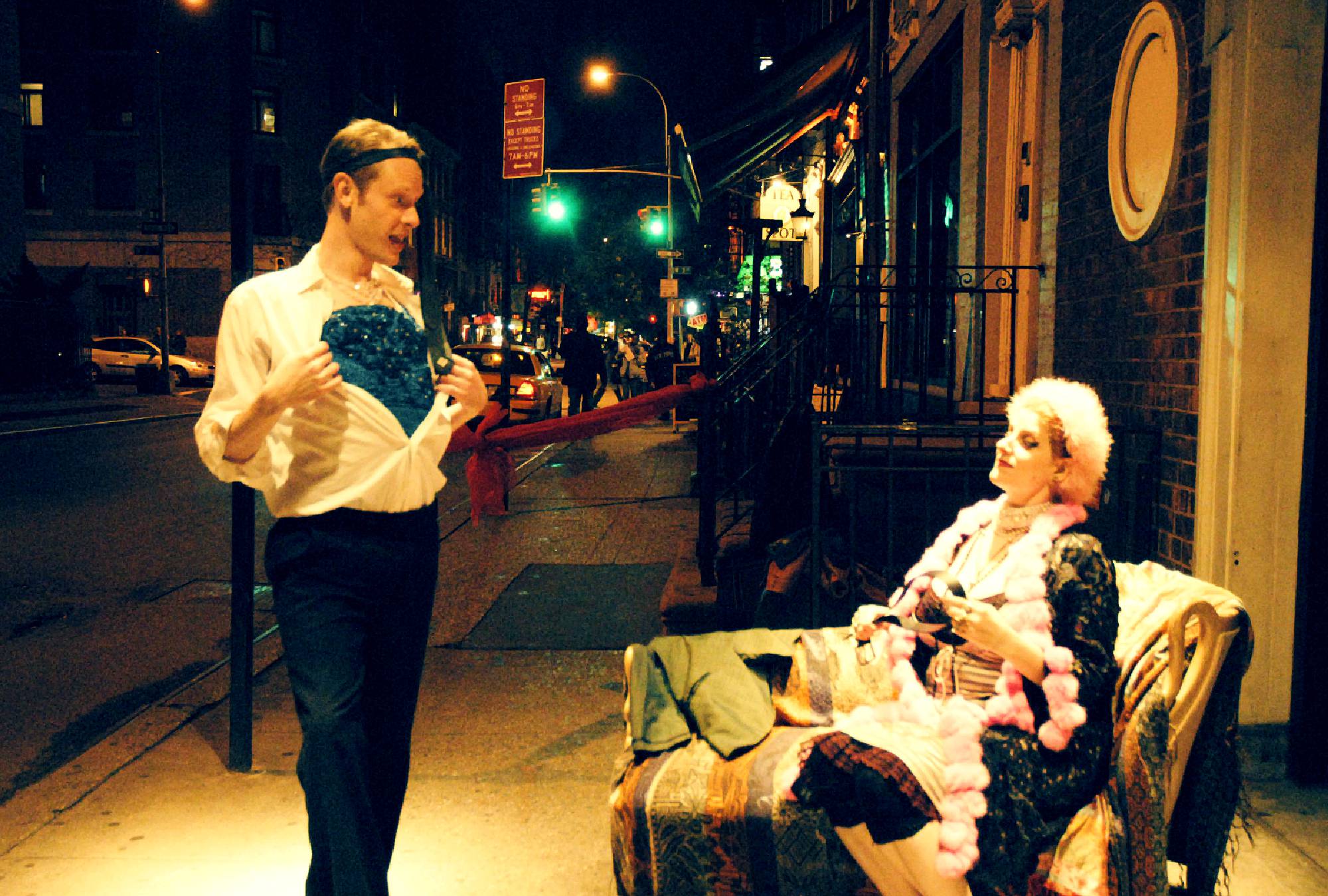 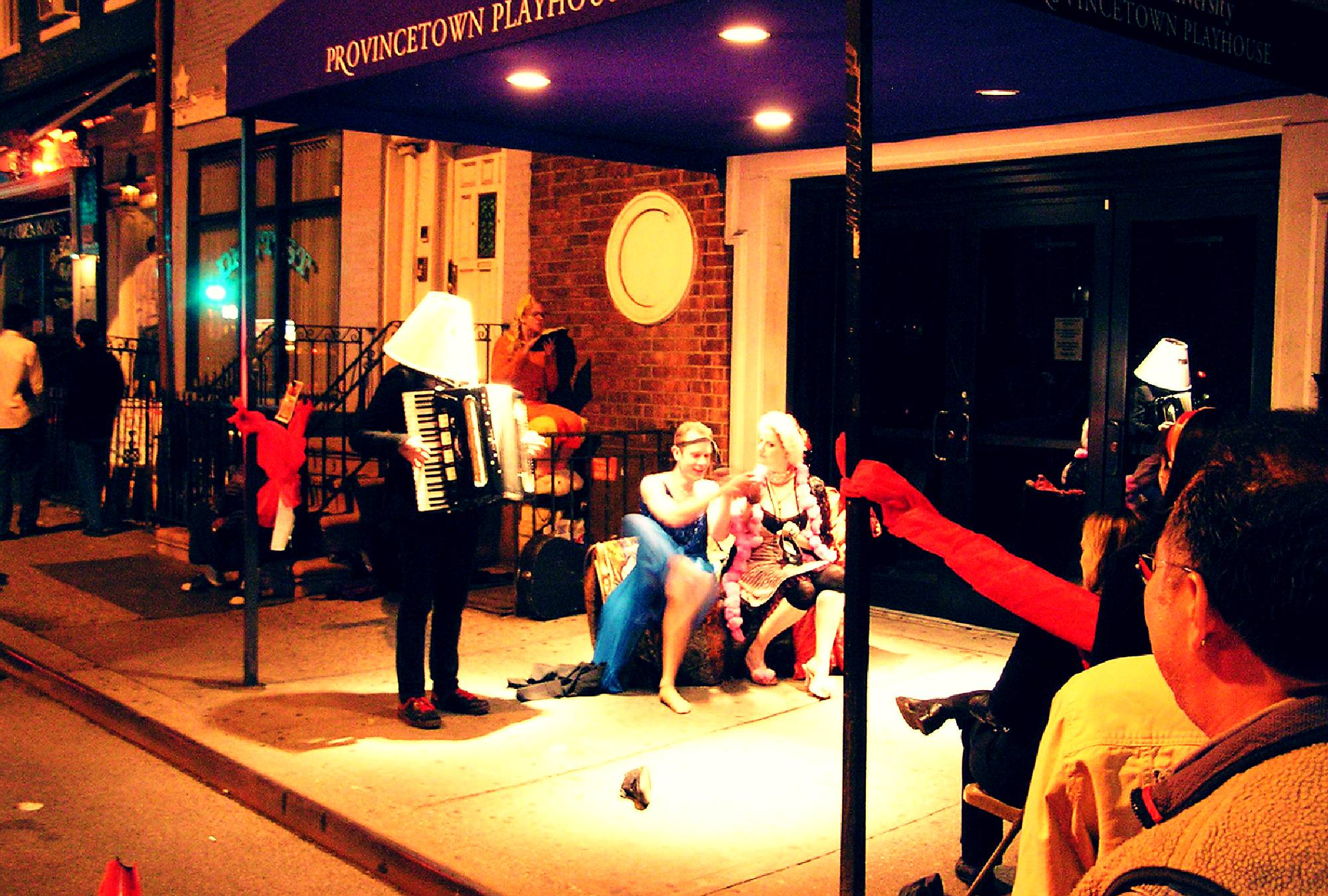 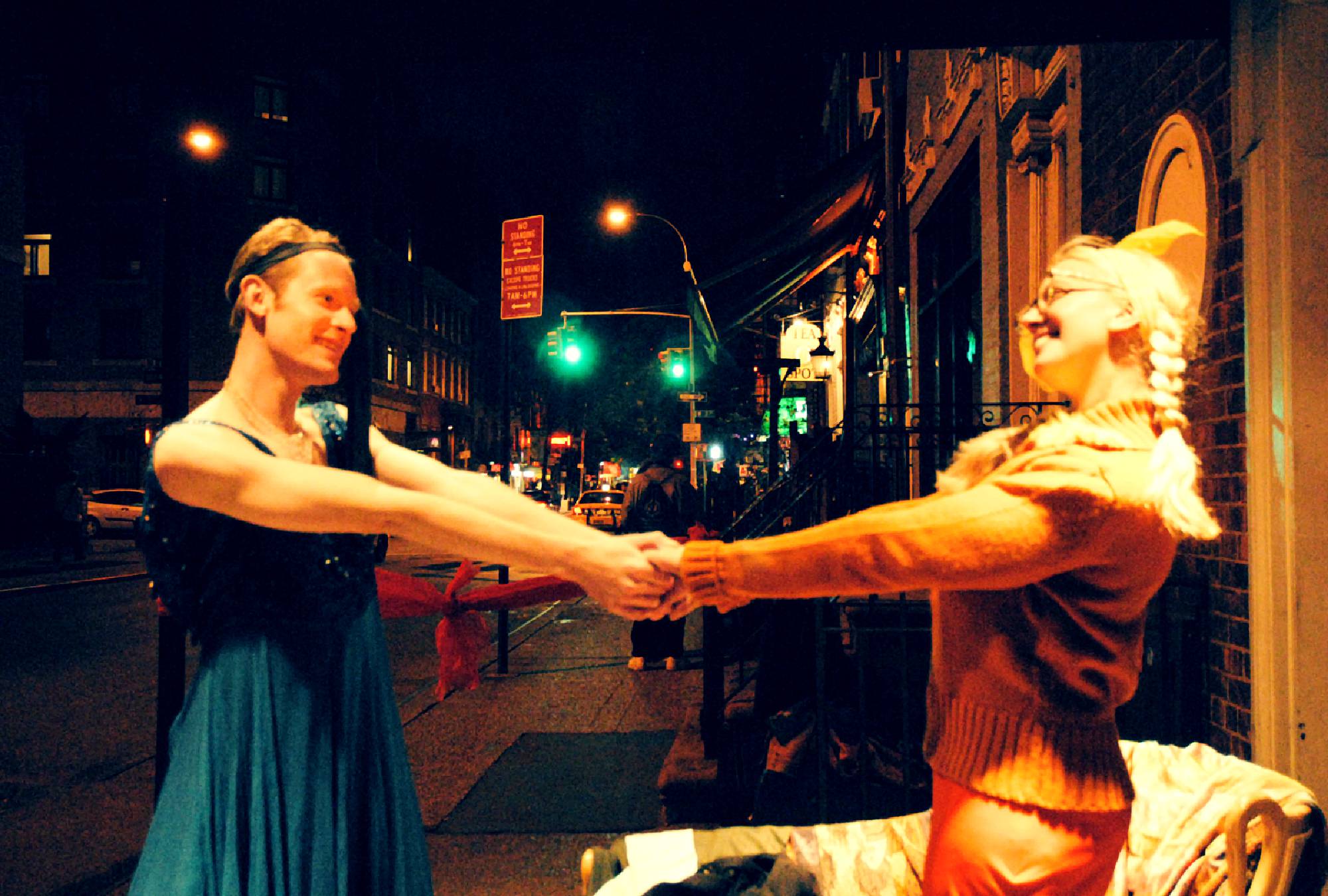 "the commitment and inventiveness were real"

"a long, wacky excerpt from Home Movies, complete with accordion accompaniment, swelled the crowd outside the Provincetown Playhouse on MacDougal."

"One of the most wonderful downtown theater events of 2006 was Peculiar Works Projects' site-specific tour and staging of excerpts from 17 ground-breaking Off-Off-Broadway plays. Utilizing 14 directors and 80 performers, the pieces were performed outdoors at various West Village addresses, close to where the '60s plays were originally performed."

"At the "Home Movies" stop, a young kid begged his big brother to stop so he could watch—he was so transfixed that I’m sure this helped create a new fan of live theater. If only "OFF Stage" could be so rewarding for its intended audience!"

from the NYT's article . Off Off Broadway When It Was Just Downtown . by Steven McElroy 09.22.06

snaps of the whole tour 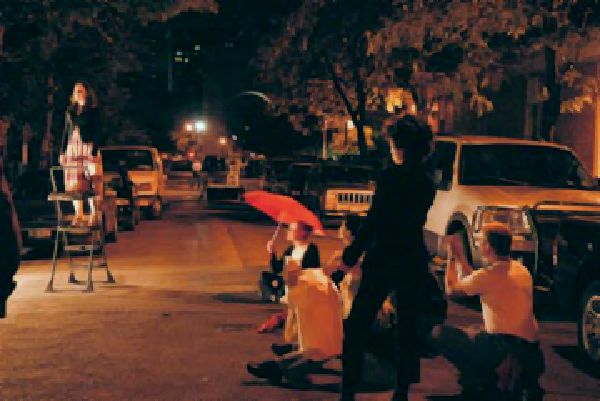 a moment with our own
Judith Malina 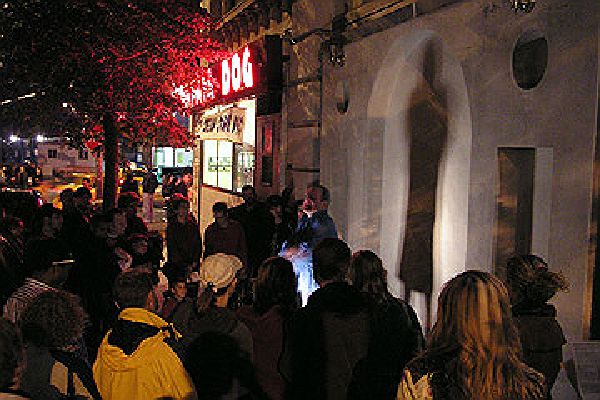 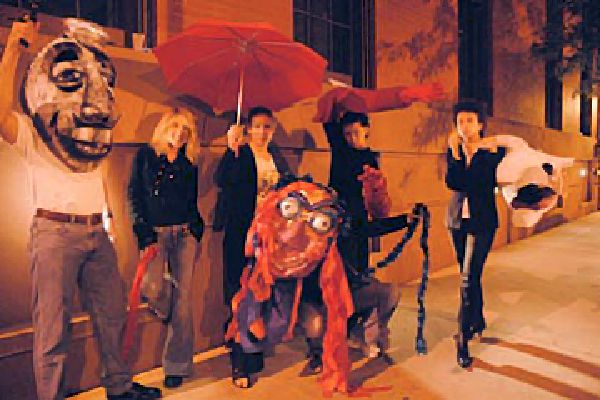 oh, the fab theatricality
that abounded 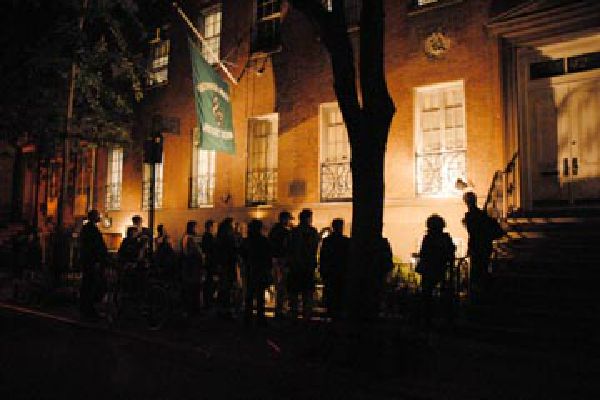 a bit about HOME MOVIES

Originally presented by the Judson Poets Theatre in 1964, directed by Lawrence Kornfeld, the bizarrely funny musical HOME MOVIES was one of the first pieces to transfer from the fledgling OOB movement to Off-Broadway. This OBIE winner moved to the Provincetown Playhouse in May of 1964. The play was VERY daring for its time - what Feingold later called "among the bright, mordant, saucy, socially outraged, and sexually outrageous Carmines-scored events to emerge from Judson into the commercial arena." No one is spared the skewer, and yet the play is somehow tender-hearted and brave.

Apparently, no one wrote down the original score (or it has been lost) but we did have a recording of the music to work from that came from Rosalyn Drexler, the only known recording as far as Peculiar Works knew. Information seems scarce on HOME MOVIES.  Here's a lovely obituary about the legendary Reverend Al Carmines in The Villager by Jerry Tallmer in which the play is mentioned.  As of the spring of 2017, Ms. Drexler is very much still with us at almost 90 and having a bit of a public moment with her Pop Art. An amazing, multi-talented woman (professional wrestler, visual artist, novelist...). Do yourself a favor and look her up. I fell in love with this wacked-out piece and hope to stage the whole thing one day...if I can but find an outrageous producer to match it.